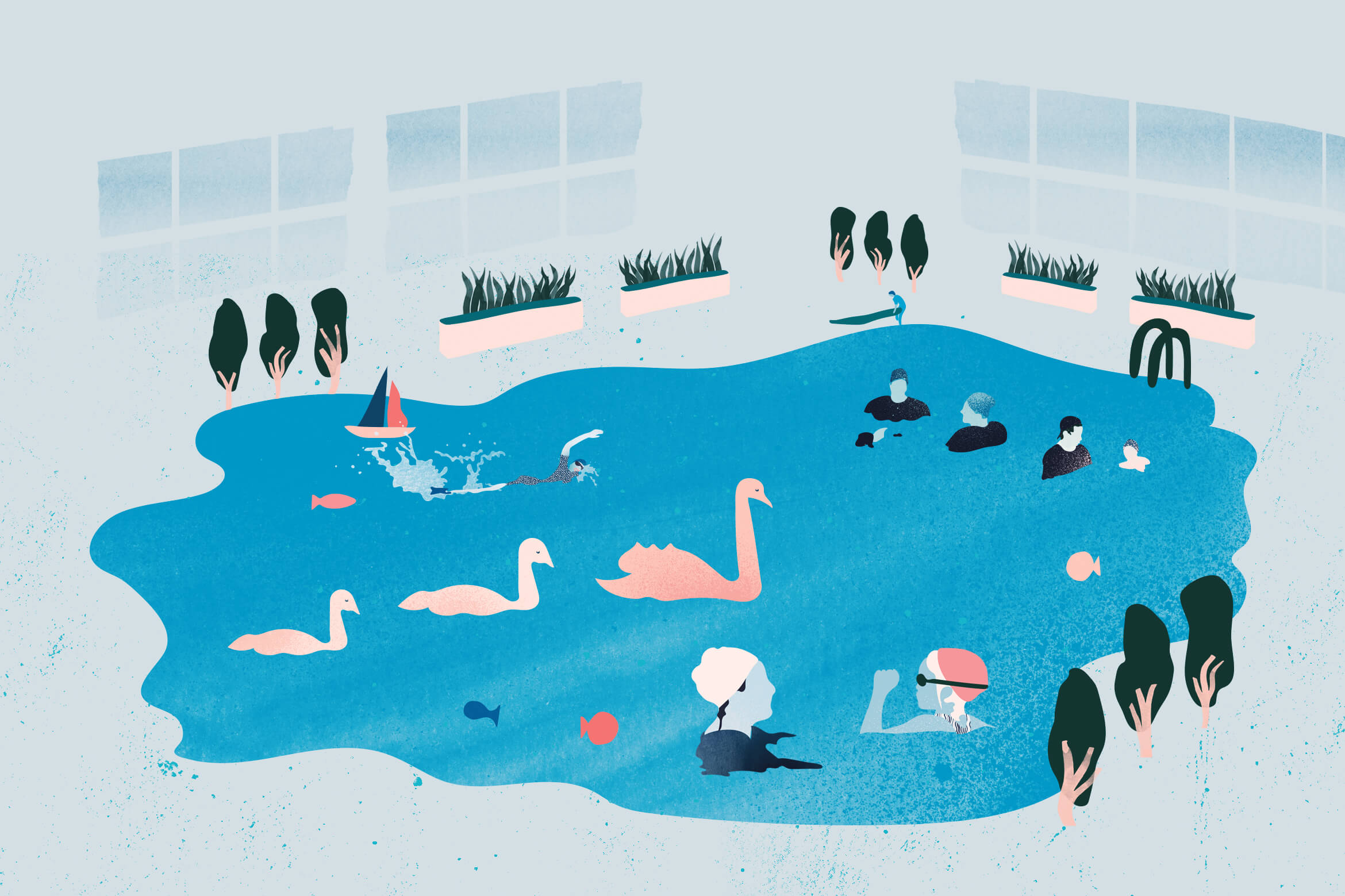 How to make a pool feel like a pristine, unspoilt lake

Or, why we decided to kick Chloramines to the curb – the toxic by-product of chlorinated pools.

Every person who dives into a pool, no matter how clean you are – even if you've just rinsed off in the shower beforehand – leaves a lot of organic waste in the pool. If you spend a lot of time in chlorinated pools, we warn you that this next paragraph isn't pretty. Maybe move along if you easily get queasy?!

And we're swimming around in all of it. If it makes you never want to jump in a chlorinated pool ever again, we're with you!

We all know that chlorine is added to pool water, used as a disinfectant to protect our health. It kills bacteria, but on it's own it's not 100% effective.

WHY CHLORINATED POOLS — AND CHLORAMINES ARE NOT IDEAL.

Chlorine isn't actually the best way to kill some of these things, as some bacteria have a stubborn, protective shield around their cells. It can take up to 24-48 hours for the chlorine to break them down and kill it – meanwhile, you're swimming around in that water while it's still active and potentially harmful.

On it's own in the pool, as far as we know, chlorine is not bad, but when it's exposed to the organic waste we leave behind, such as urine, hair or sweat, that's when a toxic by-product called Chloramines is produced.

Chloramines build up in the pool, and mostly sit just under the surface of the water. When you swim, you disturb the water, and the chloramines get released into the air. As you're swimming along, you're breathing – or with exertion, gasping – in those chloramines. Even if you're sitting on the side of the pool watching your kids during their lesson, you're exposed to this toxic by-product.

The US Centre for Disease Control states that Chloramines irritate the eyes and skin, and the respiratory tract (including the nose) when they off gas from the water and into the air above, particularly indoors.

While I'm not a doctor or scientist, from personal experience I feel like chlorinated pools can effect everything in your body, from your respiratory system, to your digestive, immune, central nervous and cardiovascular systems. When you inadvertently introduce a toxin like Chloramine into your environment, easily absorbing it through the skin and airways, it has the potential to create a multitude of effects. Anecdotally, over a lifetime of swimming, I've experienced and seen many.

Coughing fits make sense all of a sudden when you know that the chloramines sit on the surface of the water.

WHAT COMPELLED IN THE DEEP TO SEEK OUT A HEALTHIER ENVIRONMENT?

Other symptoms I've seen amongst my students and staff have ranged from skin rashes and eczema, to irritated, red, dry eyes, conjunctivitis, breathing difficulties and asthma, ear infections, dry skin, and lowered iodine levels. Some people react more than others – I've had staff resign due to terrible rashes all over their body, to one needing steroids after coming into work one day, all puffy. Kids often stop swimming due to ear infections and asthma.

My own personal history has included many of the common symptoms above, but the most disturbing was when I started having digestive issues. Despite living a very healthy lifestyle, I was suffering from a range of symptoms, from constipation, to low iodine levels, to vocal nodules. I went to see a naturopath. After running some tests, she asked me whether I'd spent some time in Asia recently. The reason she asked, was because my test results showed I had so many parasites in my system, it's like I'd been drinking water from a tap in India.

After telling her I hadn't been to Asia recently, the naturopath asked me what I did for a living. That's when I learned that parasites, such as Cryptosporidium, can survive up to a week in chlorinated water. After a heavy round of antibiotics and a colonoscopy, it became more apparent my career as a swim teacher was harming my health and wellbeing.

WHAT COULD IT BE DOING TO MY STAFF, STUDENTS AND PARENTS?

It's often easy to accept the status quo of chlorinated pools and their effects on us. You know it doesn't smell great, often we leave with burning eyes, patches of dry skin, green hair or maybe a little eczema. It's all part of the experience, isn't it? But after a particularly bad season of complaints and my personal experiences, it all made me wonder whether we could make a change.

The answer came at a swimming conference I attended last year. Everything to do with water was standing out to me. I heard a presentation from a swim school based in the hills district of Sydney I really admire, who'd recently switched to an AOP water purification system from Brauer Industries, that solves these problems through removing all chlorine by-products from the water AND the air.

There are other systems on the market, but unfortunately these are more marketing gimmick though – salt water and mineral pools with epsom salts added, still contain Chloramines, the toxic by-product wreaking all that havoc. The Brauer Industries system is the only one that 100% removes chloramines and treats all the bacteria.

WHAT IS AN AOP WATER PURIFICATION SYSTEM AND HOW DOES IT WORK?

The AOP (advanced oxidation process) water purification system is a combined approach of disinfecting chlorine (using about 80% less than a chlorinated pool), UV lights that sanitise by permanently damaging the DNA of bacteria and viruses and Ozone (oxygenated water) that breaks down chloramines, kills bacteria, viruses and parasites such as Cryptosporidium into simple oxygen, leaving no chemical residue.

The UV light kills everything – even penetrating the strong protective shields around the more tougher bacteria. Light breaks it down immediately. The water travels through long tubes of UV light, before it goes into the pool, and is then continually treated, oxygenated with the ozone.

John Morrison (BSc), the National Training Manager of healthyswim, has a background in science, and became passionate about the health of swimming in pool water which led him to his current role. He explained it to me in a very relatable way – "In summer, why don't we get as sick as we do during the winter? It's because the UV light is stronger. UV light kills bacteria in our environment."

He goes on to say "The fresh smell after the rain is ozone – it's oxygenated, so that's what gets put in the water."

The Brauer Industries AOP system combines the benefits of mineral salt water with the power of ozone to create the ultimate soft, clean, hygienic and odour free water. Our pool now uses the same technology as bottled water, removing all toxic chlorine by-products from the environment.

AOP/UV is standard across the USA and Europe, and competitive swimmers refuse to swim in chlorinated pools. Australia however, is behind.

WHAT WE'VE NOTICED SINCE MAKING THE SWITCH TO AN AOP WATER PURIFICATION SYSTEM.

Our eyes don't burn anymore – even after a Saturday double-shift. I still smell a little chlorine on my skin after I swim, but it's nothing like what it was before.

Staff have seen their skin conditions disappear, and parents are no longer telling us their eyes are stinging.

Members who use the pool are wrapped with how good it is.

WHAT MAKING THE SWITCH AWAY FROM A CHLORINATED POOL MEANS TO IN THE DEEP.

Our brand values mean nothing without having the foundations of a healthy environment. I'm so passionate about health personally, so to think I was providing an environment that wasn't, was a big personal struggle. It's hugely important to me to create a sense of ease at the pool, to develop relaxed swimmers. Thanks to this change, we're on a better path to living up to that goal.

Making this change at The Juniors has felt like a very empowering moment for In The Deep this year. Our passion drove us to innovate, but with innovation you need to get everyone on board for it to be a success. We had a little bit of a challenge on our hands to upset the chlorine status quo, but despite it being quite an investment, The Juniors, passionate about the wellness of our kids, parents and staff could see the benefits of making the switch. We so believed in the system, we inspired an investment in the wellbeing of our community. Getting everyone onboard with this change felt truly empowering.

We cherish the support of The Juniors Club in providing such an incredible facility for our community, helping us with the very important work of teaching children how to swim.

A SENSE OF EASE IS IN THE AIR NOW.

I have peace of mind now, knowing that babies aren't breathing in Chloramines while their lungs are developing, and my squad kids aren't gasping them in whilst doing their laps. Knowing that kids susceptible to eczema and asthma can swim with ease in our water. That parents are no longer sitting beside the pool with their eyes stinging, and can even leave the pool without showering in the change rooms if they don't feel like it. Knowing my staff no longer need to take a day off because their eyes are so red. That  everyone is breathing clean air, and it's an environmentally responsible solution.

I couldn't live with my business knowing what we were all breathing in and being exposed to.

We can now all breathe easy, swim with our eyes open and totally immerse ourselves at The Juniors pool, knowing that we have the best water in the world, like that of a bottle of water or an unspoilt lake.

Sea you in the water! x Sasha

LOOKING FOR MORE DETAILS? PLEASE READ OUR TERMS OF SERVICE.